Today I say a fond farewell to the old Ethical Internet website, which has been running in “Sitemachine”, my own Coldfusion-based content management system, for the last 13 years! 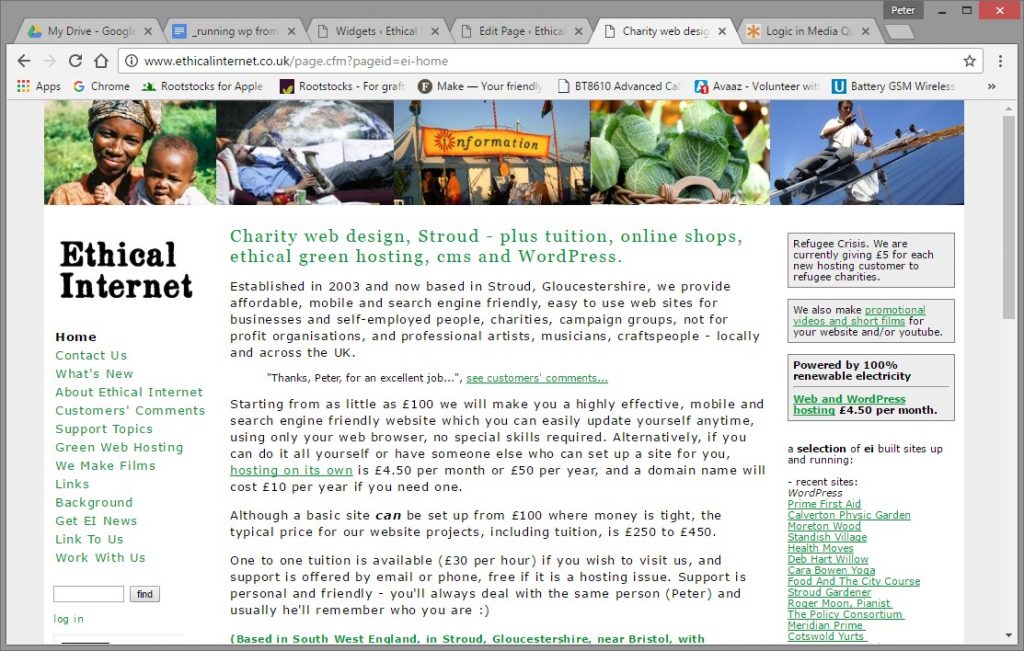 This new website is WordPress-based, but I’ve kept the appearance almost the same as the old website.  The move to WordPress was long-overdue, the main incentive being to make the website mobile-friendly at last (yes, yes, it should have been done years ago, but “The cobbler’s children always go unshod“, to quote one of my favourite old sayings).   Other benefits are the WordPress blogging/commenting system, and access to WordPress plugins for ecommerce etc.

The old website ran for 13 years without ever going wrong!  I don’t write software anymore (I don’t have the time or stamina for long days and nights at the keyboard) but I’m quite proud of that record.  The original SiteMachine, written using ColdFusion, was a great system and well ahead of its time as a Content Management System (CMS) – in fact, a few sites are still happily using it.  It enabled you use your web browser to easily do the sort of things that you can do using WordPress …add pages, edit pages, add files, edit menus (from about 2003, it was even multi-site, meaning that one installation could run one or dozens of websites).  My customers generally found it simpler to learn than WordPress, which has become the dominant CMS system now.

When I developed the SiteMachine system in the year 2000, the term ‘Content Management System’ (CMS) hadn’t even been invented, and I think I can claim to be one of the people around the globe who independently invented the idea of websites that you can easily log into and edit via your browser, which we all take for granted these days.   History-wise, I rewrote SiteMachine as version 2 in PHP in 2004, and that version still has a couple of dozen users, who are gradually migrating to WordPress as and when they feel like doing so.

We are currently giving £5 for each new hosting customer to covid-19 or refugee charities.

a selection of ei built sites up and running: